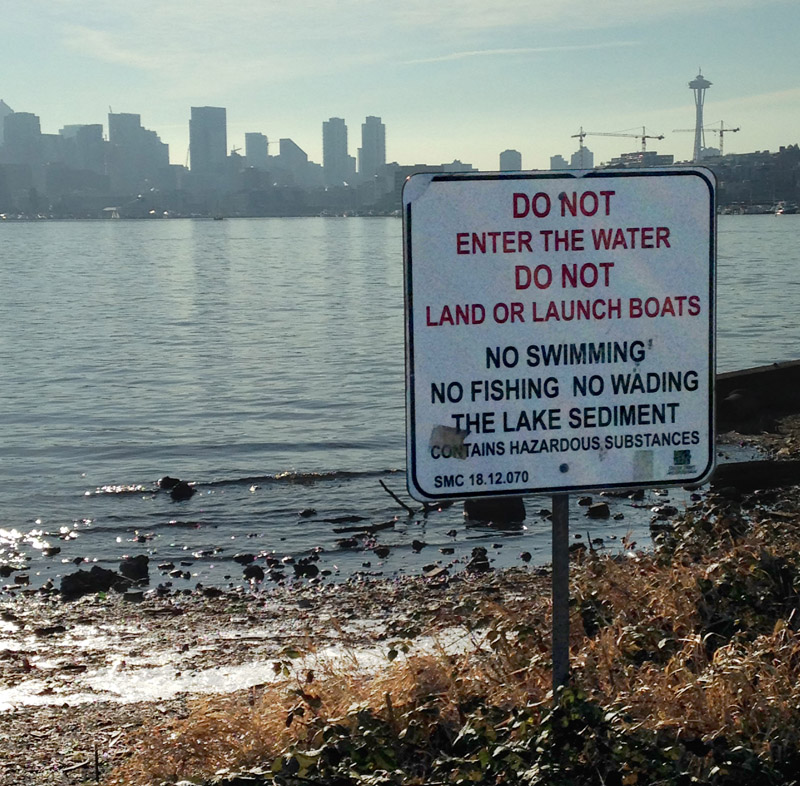 Hearkening back to the 20thcentury adage that everything you need to know you learned in kindergarten, here is the Gas Works story in the style of a children’s book. (The dates are included for reference.)

Oh no! There’s lots of poop in the sandbox!

Their important friend Richard Haag said, “Let’s spread it around. Then no one can tell there’s poop in the sandbox. Maybe it’ll even go away!”

The city did what Richard Haag wanted. Then the mayor sent out a note to everyone in Seattle.

The people did. They loved the sandbox.

The EPA went swimming and found lots of poop under the water. “Ick!” they said. “Are we sure it’s coming from the sandbox? Let’s check.”

The men who checked wore clothes they could throw away. Just in case there was poop.

The mayor was mad. “They should just wear shorts like the rest of us!” he said. “Their big white suits and face masks are making everyone afraid that there’s poop in our sandbox.”

“There’s poop in the sandbox,” the EPA said as they peeled off their white suits and took off their masks. “It’s oozing into the water too.”

“Is not!” cried Richard Haag.

“We’ll take care of it,” said the mayor.

People forgot about the poop in the sandbox. They still came to play.

Eleven years later, EPA wondered, “Is the sandbox clean? Is the water clean?” (1995)

They checked at the shoreline. “Oh ick! It’s on my feet.

Someone should clean it up right now!”

The city owned the sandbox. “Not me,” said the city.

Richard Haag moved the poop around in the sandbox. “What’s the big deal?” asked Richard Haag.

EPA said, “Kids who eat dirt may get cancer. Fish that swim by may die. People who swim may get rashes.”

The EPA wanted to tell everyone the sandbox needed to be cleaned up. They were ready to put a notice in the newspaper.

“No!” said the state. Everyone turned around to look. Where had they come from?

The state said, “We don’t want to scare anyone. Let’s do it quietly.”

“It’s taking too long,” said EPA. “People are telling us to clean it up.”

The state talked to the gas company.

The state talked to the city.

Richard Haag talked to the state. “The sandbox is actually okay,” he whispered in their ear.

Today someone saw poop in the sandbox. People were playing around it. They called the EPA. (2013)

The EPA is thinking, “Maybe we should send those guys to check again. They can wear their big white suits.”