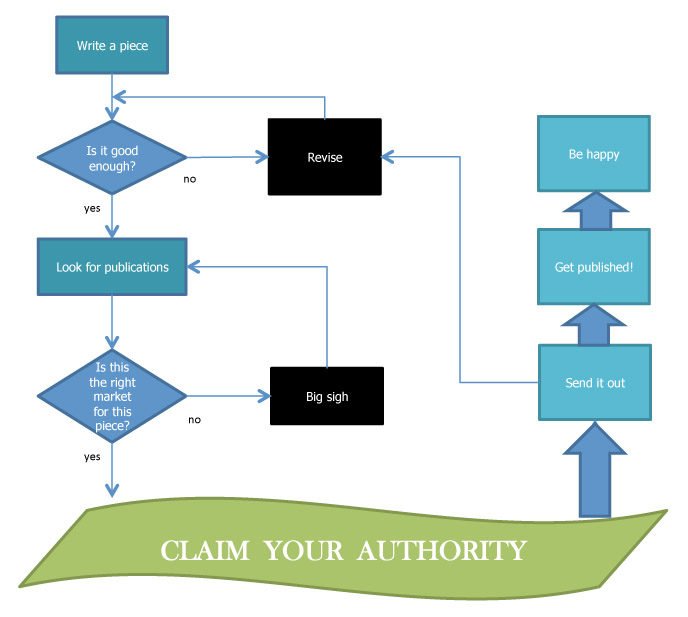 Within moments of arriving in Boston, I made my first friend. As the taxi driver set down my suitcase at the curb of Irving House, I saw her standing outside, her brown hair riffling in the January chill. We soon found out we were both new students in the same MFA program. I was overjoyed. Flying in from Seattle, I knew no one. Now I’d have someone to walk to school with over the next ten days of our residency.

“I’m going to dinner. Want to join me?” I asked. Her eyebrows flew up – a hint of surprise – but I dismissed my misgivings when she quickly said yes. After I lugged my suitcase upstairs, we set off. “Seafood okay?” I asked, and it happened again – the eyebrows, the quick nod. I passed it off as a facial tic. I’d already scouted a restaurant that served fried clams, a favorite throwback to my Boston childhood. She ordered chicken strips. We talked about our writing backgrounds and traded stories about our families. We walked back to Irving House, said our goodbyes and see you in the mornings.

Later that week – after we became real friends – she confessed she was terrified the entire time. She admitted she didn’t like seafood. She’d called her husband as soon as she’d locked herself back in her room, starting with a panicky, “Guess what I did? I had dinner with someone I don’t know!” and ending with an unsettled, “But I think I’m okay now.”

I had inadvertently triggered the part of her limbic system that I now recognize as “the pizza place.” It’s the jumping off point where risk meets reward.

Even later that week, in the din of the cafeteria, six of us were sharing our worst fears about writing. Admitting the fear was easy; the hard part was how to get around it. That’s when she piped up, “Well, I don’t order pizza over the phone. I mean, I can’t.”

My head spun, but I kept quiet. As an engineer, I felt totally outflanked, trying to feel my way around this literary world. I wasn’t nearly as well read as my classmates. Had I heard her correctly? These non-linear discussions appeared to be a hallmark of right-brain creative thinking. But when people started talking over each other, I sighed in relief. I hadn’t missed anything: we were actually talking about pizza.

“Is it a problem with a particular pizza shop?”

“Do you mean in town, or when you’re on vacation?”

“But can you order a pizza in person?”

She waved her hands in front of her face as if to say “Stop!” and then tapped them on the table to get our attention. “If I’m sitting at the pizza parlor, sure, I can give them my order. Just not over the phone. I think it’s…” she hesitated. Should she reveal so much of herself to people she’d just met? Her voice wavered but she pressed on, “Because the person on the phone might judge me.”

There was a brief silence, then peals of laughter.

“Why would they possibly judge you?”

She broke in, louder now. “Because,” she said, as if it were patently obvious, “I don’t order vegies on my pizza!”

Large slices of this conversation make little sense to me, but my MFA training tells me to loosen up, to stop forcing logic on everything. Only then could I embrace the “pizza place” metaphor. The pizza place becomes a dam, a tipping point, the final fork where “I don’t want to” meets “I won’t” or “I will.” Terror happens here. It’s the place the Chicago Tribune columnist Mary Schmich had in mind when she wrote, “Do one thing every day that scares you.”

As a writer, the pizza place is a clog in my process. As an engineer, I use flow charts to map my world. Here’s what that looks like: 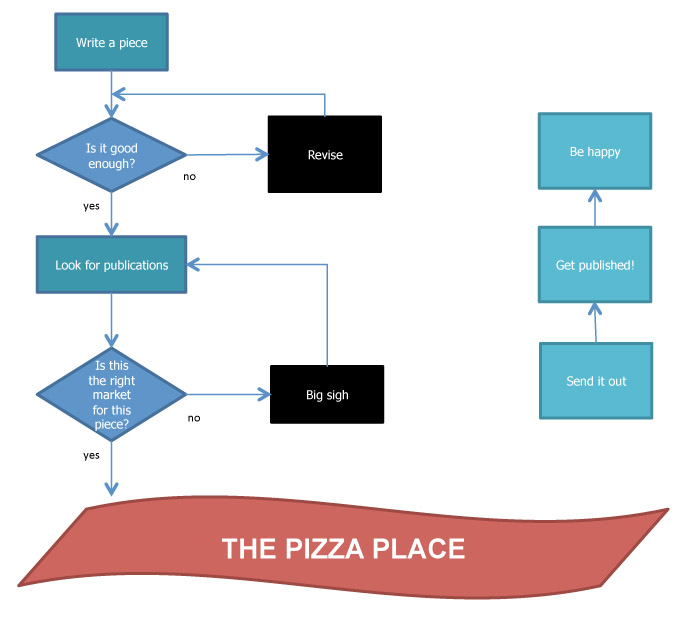 You’ll note there’s no connection between the pizza place and the world of publishing and being happy.

Early attempts to get past my pizza place simply weren’t sustainable. Sneaking to the edge and flinging a piece of writing out into the world terrified me. Was my work good enough?Am I worthy?Self-doubt bubbled like acid just below the surface. I needed to get a hold of myself.

The answer came as a gift from a fellow student. While working on her MFA, she had a family crisis. She thought about quitting. But a message from her mentor gave her the vision – and future perspective – to pursue her MFA dream. I was lucky enough to have that mentor too. Here’s what Alex Johnson said:

“One of the greatest gifts that writing offers is control – even though we often feel we have none at that particular moment…I’ve always been struck by the word authority having ‘author’ embedded right in it.”

I sat with that powerful idea. Writing as a way to gain control over chaos. Claiming my own authority.

That’s what I want.

So now I confront my pizza place. Rejection may overwhelm at times. I may fall into the infernal do-loop of editing and resubmitting. But I stay disciplined. Setting bricks – sending pieces out into the world. Taking measure. Believing the bridge is part of my journey.